You are here: Home › 6 DISORDERS CAUSED BY THE EXCESSIVE USE OF SMARTPHONES AND TABLETS!
By dario on February 23, 2018 in Parenting Advice 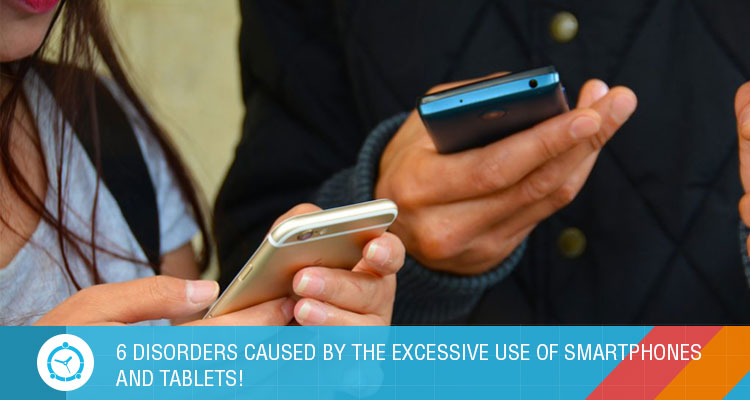 New technologies, increasingly present in our daily lives, can also cause various types of addictions or diseases, some of them are derived from the excessive use of smartphones and tablets.

The addiction to mobile devices, which is manifested in the constant need to record calls, text messages or their status in general, can lead to memory disorders, inability to control their impulses or problems of concentration, warns Phil Reed, professor of psychology from Swansea University to The Daily Mail newspaper.

“Addiction to smartphones can lead to depression and social isolation,” said the expert.

The British newspaper lists some of the new diseases and disorders that threaten screen users.

The ‘Nomophobia’ (No-mobile-phone-phobia) or phobia of not being able to use the mobile phone, causes a sensation of anxiety in the users when they are left without coverage, the battery is discharged or they can not find their mobile device.

Among the symptoms associated with this phobia is the inability to turn off the phone or overcome the obsession to check messages or the status of the battery. According to specialists, 53% of Britons suffer from this disorder.

It is a side effect of the use of several 3D applications for iPhones and iPads. The desynchronization between movements of the eyes and the signals perceived by the equilibrium system, which the brain interprets as real movement, can cause nausea, visual fatigue and dizziness.

Sitting hunched is a very common posture for many users of portable devices that can cause additional pressure to the spine and, in turn, cause neck or shoulder pain. According to a survey conducted in the United Kingdom, 84% of young people between 18 and 24 say they suffer from pain because they spend a lot of time in front of their computers.

It is a neurological syndrome caused by total dependence on the telephone. It is characterized by the feeling that your mobile vibrates, even when the addicted person does not have this device on top or when his mobile is off.

Continuous concentration on the screen of a smartphone or tablet reduces the number of blinks to a one-third proportion, causing changes in the production of tears and, consequently, causing permanent damage to the eyes.

Frequent use of the touch screen can cause pain and cramps in the fingers, wrist or forearm, which can lead to inflammation of the tendons in the long term. At least 43% of smartphone users say they experience this type of pain.

To avoid all these disorders for your kids, experts suggest parents to make use of the parental control apps such as FamilyTime and to limit their screen consumption. Pick their suggestion and act for your child’s well being now!

TEENS WITH LOW SELF-ESTEEM ARE MORE ADDICTED TO THE CELL PHONE – STUDY REVEALS
ADVICE FOR PARENTS WHO HAVE JUST GIVEN THEIR CHILD THEIR FIRST SMARTPHONE!